Some ‘Favorites’ we have found online … and our 2010 World Pride Parade Calendar w/ YouTube Clips!

Check out YouTube videos of pride parades
around the world!

You can now find the WWP project on the
Gay Activists Alliance International website. 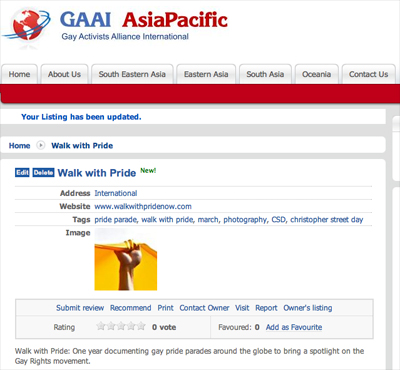 A main focus of GAAI websites is to put on links to other Equality and Human Rights groups and support groups that may direct people to another essential service in their region as well as articles for the website.

The GAAI campaigns revolve around anything that we believe affects the rights oof Lesbian, Gay, Bisexual, Transgender, Intersexual and other Gender Variant people–equally the GAAI highlight and campaign for Womens Rights (regardless of sexualality) and the World AIDS Campaign (WAC) – Dennis H., GAAI co-founder.

To see the other resources available on their website, the link is:

Getting Ready for Sydney, Part 2

The Sydney pride parade is now just over a month away, and we are busy making preparations for the trip.  Chad will be arriving in Sydney a week before the parade in hopes of photographing some side stories to go along with the march.  The Mardi Gras website is great for finding additional activities that are part of the pride festival.  There’s a huge range of events including ‘Queer Thinking’ discussion sessions, musical/theater/and cabaret performances, Fair Day with 70,000 people hanging out for a day at the park, and the huge Mardi Gras Gay and Lesbian parade, followed by Harbour Day – a large outdoor party.  This year, the artist Spencer Tunick will also be in Sydney working on a large scale art piece called “The Base” – Tunick is famous for large scale photographs where he asks thousands of nude individuals to participate.

Same-sex Marriages Allowed? No
◊ In 2003 legislation was proposed by the government to grant civil unions or same-sex marriage under the Human Rights Basic law, however it was  opposed by cabinet members and did not succeed – yet, Taiwan did become the first country in Asia to suggest such a law.

Can Gays Serve Openly in the Military? Yes
◊   There is no policy screening out homosexuals.

Laws Concerning Gender Identity? Some
◊  As of 2007, female-to-male transgenders cannot get an ID card that identifies them as male unless they have undergone all three parts of gender reassignment surgery.  This law was protested against by the transgender group Taiwan TG Butterfly Garden (chinese only site)

GlobalGayz is a gay-owned travel, news and culture website focused on les-bi-gay-trans life in countries around the world.  It provides gay travel, life, cultural information, and news, on various countries, including Taiwan. http://www.globalgayz.com/country/Taiwan/TWN

Out in Taiwan = This is a comprehensive and uncensored gay resource for English speakers in Taiwan. http://www.outintaiwan.com/