The WWP’s photographer, Charles ‘Chad’ Meacham has been in Minsk, Belarus photographing the gay rights activists during Minsk’s 2011 Equality Festival.  Images include pictures of the banned Pride march, which took place on May 17, 2011.  See more photos on Chad’s website – www.CharlesMeacham.com

In Belarus LGBT Prides are illegal, and are planned out in secret by a small group of activists.

The activists face being arrested for protesting for very basic Human Rights.

The average age of activists here is 20. Almost all of them have spent time in jail. 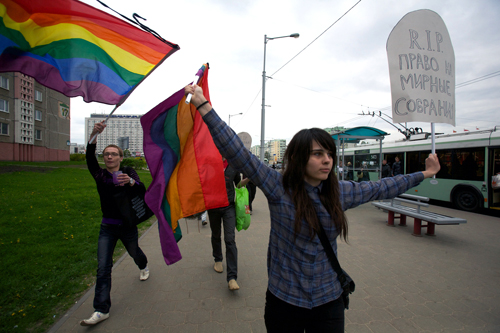 Many have also been kicked out of their universities for their actions.

However, they keep fighting on.

Like
Be the first to like this.
This entry was posted in Belarus and tagged Belarus, gay rights, homophobia, human rights, IDAHO, LGBT rights, May 17, Minsk, pride. Bookmark the permalink.