The WWP’s photographer, Charles ‘Chad’ Meacham has been in Minsk, Belarus photographing the gay rights activists during Minsk’s 2011 Equality Festival.  Images include pictures of the banned Pride march, which took place on May 17, 2011.  See more photos on Chad’s website – www.CharlesMeacham.com

In Belarus LGBT Prides are illegal, and are planned out in secret by a small group of activists. 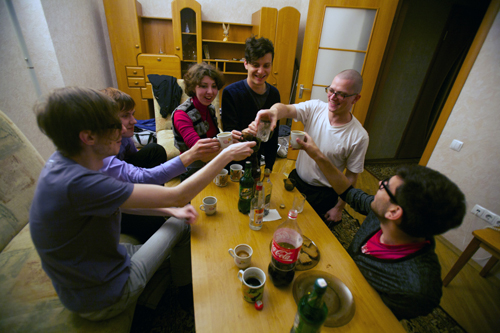 The activists face being arrested for protesting for very basic Human Rights.

The average age of activists here is 20. Almost all of them have spent time in jail.

Many have also been kicked out of their universities for their actions. 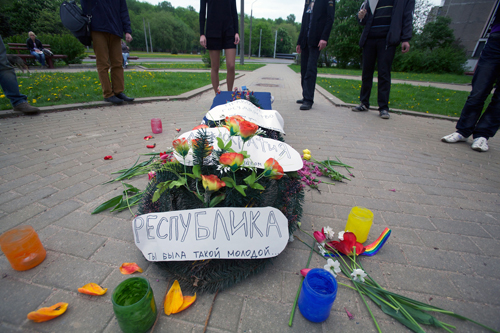 However, they keep fighting on.

At the WWP project we are incredibly proud to be able to support public actions taking place around the globe for  the International Day Against Homophobia and Transphobia.

The Coalition `Sexual and Health rights of Marginalized Communities` held a press conference today, on May 17, Tuesday, on the Macedonia square (near the bookstore `Kultura`, in front of Alexander the Great Monument, which is under construction) for the occasion of the International day Against Homophobia and Transphobia. The press conference was followed by an outdoors exhibition, `Images Against Homophobia`, part of the mutual project of Charles Meacham and Sarah Baxter – `Walk with Pride`. The exhibition was simultaneously held in around 20 other cities in the world, including its opening in the European Parliament. 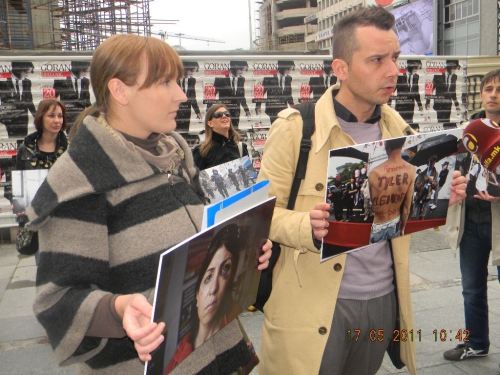 In Minsk, the IDAHO Belarus chapter display the ‘Images Against Homophobia’ exhibition by American photographer Chad Meacham as a part of Equality Festival events . It is a summing up of the projectWalk With Pride.

The works of Chad Meacham clearly depict the situation of LGBT people around the world. Some pictures were devoted to the Belarusian Slavic Pride, which was held in Minsk last year. At the beginning of the event the author gave a speech to the visitors, thanking them for participating in this event, as well as expressing support for the LGBT community in Belarus.

The Christopher Street Day march is held every year around the world. Participants remember the riots of homosexuals against the New York police brutality of 1969. At the same time, they are promoting acceptance and legal equality. In many parts of the world demonstrators be putting their health and their lives to stand up for LGBT Rights. In 2010, the international award-winning photographer Charles Meacham, photographed the parades and often the violent counter-marches accompanied in 15 countries. The Municipal Association of Tolerant Brandenburg, Ver.di, exhibited Meacham’s ‘Images Against Homophobia’ exhibition at the State Parliament of Bradenburg. The organization will soon be holding another exhibition to be held at the Berlin East Railway Station from June 16 to June 29.

Zagreb Pride and Amnesty International Croatian have joined up to show the ‘Images Against Homophobia’ photo exhibition at the ITD Theatre in the Zagreb Student Center, followed by a direct action to draw attention to the killing and harassment of the transgender community in Turkey.

On the occasion of the International Day Against Homophobia Sofia Pride Foundation presented a selection of pictures from the global photo exhibition ‘Images Against Homophobia’ in front of the National Theater from May 16 – May 25.

Read more about the event here

The Taiwan Pride Organization community joined together to hold 5 exhibitions of Charles Meacham’s ‘Images Against Homophobia’ exhibition in Taiwan. 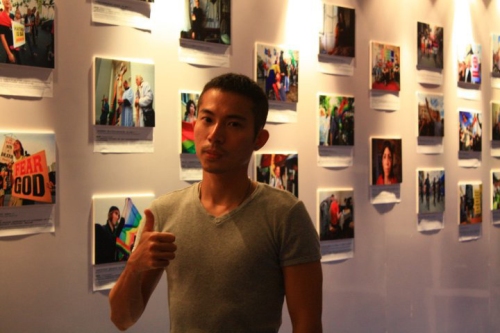 Find out more details at the Taichung Rainbow Paradise website
Read more about the events at Coolloud.org.tw

To find out about other hosts of the global ‘Images Against Homophobia’ exhibitions visit: WWP’s Upcoming Exhibitions

Opening of the exhibition at the European Parliament in Strasbourg on 10 May 2011. Photo European Parliament. In September, 2009 Chad Meacham, an American born photographer, embarks with his girlfriend Sarah Baxter on a photography project. Their idea is clear: “Walk With Pride” will celebrate the freedom of expression of LGBT people around the world.

For a year, the couple travelled to 15 different countries to follow the organizers of Gay Pride marches in Europe and Asia. Meacham’s previous work has won over 20 international awards including the National Geographic Traveller.

The result is an impressive collection of photographs expressing the difficulties of LGBT people to exercise their right to freedom of expression.

With the exception of London and Sydney, the couple ignored the bigger more famous prides in New York, Berlin, and Madrid to put a focus on small scale events which are often not welcomed in the countries they are held.

In Minsk, Meacham said it was a total shock when he witnessed a police crackdown on the local activists who were trying to stage their event despite the bans they receive from the city hall.

“I understood and was inspired by the courage of these people who are risking their lives to defend their freedom of expression. It was the events and activists in Minsk that showed me the true meaning of the Pride Movement, and showed me the direction the project needed to go.”

The couple was later in Moscow and Warsaw where he also captured images of anti-gay protesters. In Turkey, they attended Istanbul’s first Transgender Pride the first of its kind in a country where Transgender people are often murdered.

Baxter stated that the life of Harvey Milk served as a source inspiration for the conception of the Walk With Pride Project but not only. “This project was sparked after months of following the debates in America on gay rights issues, and our frustration with our government’s policies” says Sarah.

During their trip, Meacham and Baxter worked closely with LGBT activists and Pride organizers. Their help was more than appreciated and this is how the idea of the exhibition “Images Against Homophobia” was born.

“Chad and Sarah have been so helpful to us that we believed their work must be shown on a broad scale. We offered them to use our contacts to organize this exhibition around the world” says Nikolai Alekseev, Moscow Pride Chief Organizer.

Naturally, the exhibition takes place around the International Day Against Homophobia.

“It was only logical to organize this tour around the Day Against Homophobia and Transphobia and have IDAHO as a co-sponsor of the event” says Alekseev who also serves on the board of the IDAHO organization.

“We hope that by viewing these photographs, people will realize what problems homophobia and transphobia creates” says Meacham.

The exhibition kicked off officially in Strasbourg at the European Parliament yesterday and the President of the Parliament gave a speech at the opening. It will also finish in Strasbourg at the end of June at the Council of Europe. Apart from Strasbourg the exhibition will be shown in the coming days in 20 different locations around the world: Berlin, Postdam, Liege, Zagreb, Sofia, Manila, Sebastopol (California), San Francisco, Sydney, Bucharest, Brussels, Taichung, Kaohsiung, Yilan and Taipei, Phnom Penh, Skopje, Minsk and Moscow.

Don Spradlin, President of the Noble Beast Foundation, is organizing the exhibition in California, “The reason why I wanted to take part in this initiative is because we have direct experience as producer of the International Mr. Gay Competition of a range of insults due to homophobia around the world. Men who participated in our annual event have lost their jobs because they were willing to represent their nation. They have been kicked out of school, been hounded by the press and denied visas just because they are gay “

“There’s a lot of solidarity behind this initiative. Everyone contributed how they could. Our main goal is to help raise awareness for the global LGBT community, and help put an end to homophobia and transphobia” concludes Meacham.

The exhibition can be seen online at GayRussia.Ru HERE

Jerzy Buzek officially marked the International Day Against Homophobia for
the first time in 2010 via video message. The President of the European Parliament was joined by Members of the European Parliament Ulrike Lunacek and Michael Cashman, Co-Presidents of the European Parliament’s Intergroup on LGBT Rights, and Charles Meacham, author of the photographs.
After the event, Michael Cashman and Ulrike Lunacek declared: “We are
proud to be members of a Parliament that represents 500 million Europeans,
and which stands ready to defend the human rights of lesbian, gay, bisexual
and transgender people. The genuine and heartfelt engagement of Jerzy
Buzek, a Polish EPP President demonstrates that homophobia no longer
belongs to mainstream EU politics. We are grateful to Mr Buzek and all our
colleagues for helping LGBT people live their lives freely, and without fear.”
Since 2006, the European Parliament adopted five resolutions demanding
that LGBT people’s human rights be respected in Europe, reminding EU
countries that banning pride marches breaches the European Convention on
Human Rights. Over 180 European pride marches will take place in 2011,
from Iceland to Malta and from Portugal to Russia.

The exhibition contains 20 images by award-winning photographer Charles
Meacham, from New York. The photographs will be shown in over 20 locations around the world, starting in the EU Parliament from 9 to 12 May. About the International Day Against Homophobia 17 May is the International Day Against Homophobia and Transphobia. Each year, the date marks the anniversary of the 17 May 1990, when the World Health Organization announced it would remove homosexuality from its official list of mental disorders.

Walk With Pride – An Overview

What is the Walk With Pride Project …

From 2009-2010 photographer Charles Meacham and Sarah Baxter visited and documented 15 international LGBT Pride marches throughout Asia and Europe.  This website contains images, videos, and a blog of their trip.

To see photo galleries from each pride, visit Meacham’s Behind the Photos blog.
http://wwpbehindthephotos.wordpress.com/

The Prides attended were:

Now in 2011, with the support of the International Day Against Homophobia and Transphobia Organization, Meacham has put together an ‘Images Against Homophobia’ exhibition that will be displayed worldwide.  The gallery will open at the European Parliament in Strasbourg, with opening ceremonies conducted on May 10, 2011, by the European Parliament President Jerzy Buzek.

Additional exhibitions will take place in over 20 cities worldwide, and intend to draw universal awareness to the International Day Against Homophobia and Transphobia on May 17.

We invite you to view the following:

We always enjoy hearing from those who view our project.  Please feel free to contact us at wwpproject (at) yahoo.com.