Hi -  Nick here from IDAHO Sydney in Australia with an invitation to participate in the 2011 STANDING TALL Catalogue we intend to put together for IDAHO 2011.

IDAHO is an acronym for International Day Against Homophobia – 17th of May world wide. Last year we created a catalogue titled ‘Break The Silence’ which included images from the exhibition and introductions form the living library books. This year we are not having a living library but I still think its important to represent and document the many different faces within our community. Its a great way to help people that feel isolated or are questioning their sexuality. They are not alone and they are not abnormal.

If you would like to participate all I need is one paragraph (100 to 150 words) from you which tells us about you. You can talk about anything you like. You could change someone’s life in one paragraph.

Also please tag your paragraph with your name, age and were you live (country). If you are not comfortable with using your name feel free to make one up. Also if you would like to extend the invitation to all your friends and family that would be great!

Together we can make a difference. 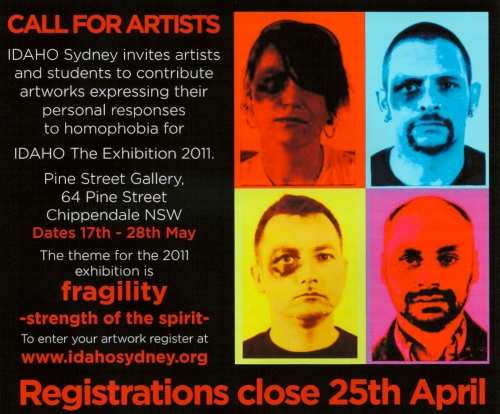 I arrived back in Taipei from Sydney over two weeks ago, and the daze still hasn’t fully worn off.  I can still see, hear, and feel Mardi Gras.  I close my eyes and find myself back on Oxford Street in the middle of all that sound and color.  For me, the best part of being a photographer is coming up with an idea and then making that idea happen.  The experience of being exactly where you want to be, at the exact time you want to be there is an incredible feeling.  But as any photographer will tell you, not everyday is fun, and Sydney was no exception.

I arrived in Oz the day before one of Mardi Gras biggest events, Fair Day.  Over 70,000 people were expected to show up at Sydney’s Victoria Park, and I was looking forward to a day of shooting and getting to meet different members of the community that I had been in contact with via email.  But  that morning getting to Victoria Park was a bit of a hassle.  As I had written before, my hotel, which advertised being a LGBT and Mardi Gras supporter, knew nothing about the event or where it was being held.  Going out onto one of the main streets in Sydney, two taxi drivers swore they had never heard of Victoria Park, and that I must have the name wrong.  Finally, with the help of the police, I made my way there.  There was not a cloud in the sky, and the Aussie sun was out in full force.  Jet lagged and sunburnt, I found it hard to focus my attention and get into any kind of rhythm.  I took pictures, but not anywhere the number I had hoped.

Two days later, I came across a magazine article that talked about a right-wing christian protest held a few days before the main parade during a church service.  The event looked fairly large, so I checked some local maps, found the church, and prepared to go there to photograph the service.  Getting there was not as easy as I thought, as I was directed to board the wrong train and missed the whole thing.  For me this was 0/2 and you can really start getting down on yourself.  It cost a lot of money to get to OZ, and not to produce would be a pretty big blow to the project, and to my morale.

The next event was the actual parade, and the pressure was on.

Sydney’s Mardi Gras is by far the largest, most organized event that I have yet photographed for the WWP project, and having the opportunity to be a part of it all was a truly unforgettable  life experience.  There were press passes, press meetings, police barricades, lots and lots of other photographers, news channels, etc..etc.  The true enormity of it hits you as you look out at the huge crowds gathered. 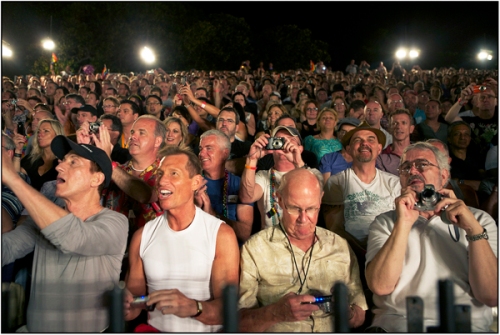 Let me just say, I felt much better about the trip after my experience photographing the parade and Harbour Day.  I’ll write more about these events soon, and check the WWP Flickr account for new photos from Sydney. 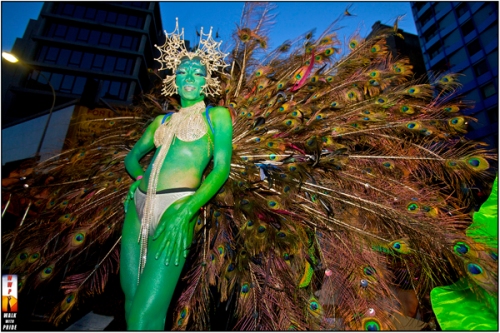 Can Gays Serve Openly in the Military? Yes, since 1992

◊ The Anti-Discrimination Act 1977 “prohibits discrimination on the ground of homosexuality in a number of areas including employment, accommodation, education, the provision of goods and services, and club membership or benefits.”

◊ July 2009, the Australian Passport Office reviewed its policy to make it easier for those seeking a passport in their preferred gender

Guide To Gay – A popular entertainment and lifestyle website based in Australia.  The brand also includes travel guides, and provides high quality information for visitors.
http://www.guidetogay.com

Pride Centre – Non-profit organization that works as a community centre and social services for the LGBT community.
www.pridecentre.com.au

He’d spent about a week there photographing different Mardi Gras events, including the main events of Parade Day and Harbour Day ’10.  On our main project website, we’ve upload the top pictures into a “Sydney Pride Gallery“.  Soon, we’ll be uploading some more to Flickr.

Chad will also be uploading a blog entry later in the week further describing his experiences photographing Mardi Gras.

Chad will be back from his trip to OZ later tonight, and we’ll get the blog updated shortly.

Getting to Victoria Park is no easy task.  Well it should be, but it wasn’t.  My hotel, which advertises on their website to being a Mardi Gras and LGBT community supporter knew nothing about the event, or where Victoria Park was.  I then just headed down to the city, where two taxi drivers told me they had never heard of the park, and that I must have the name wrong.  Luckily, after about 40 minutes, a police officer pointed me in the right direction.

Now, I’ve heard about the Aussie sun before, but now I know the true meaning of “Being Naked.”  It was hot, and not a cloud in the sky.  The park was full of music, food, promotional and awareness booths, a pet show, games,  and just friends getting together for a regular day in the park. 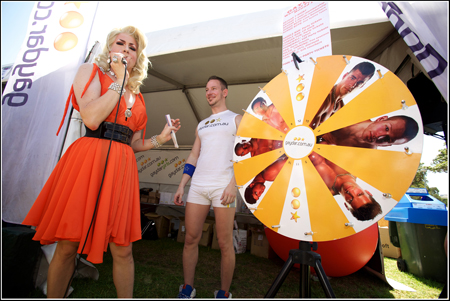 It was a long day, but a very interesting introduction to Sydney.  The community here is much more established, and free than in Taiwan and the Philippines.  For me it had a much different feel, and I am still trying to put my finger on it.  Still jet-lagged and sunburnt, I slowly made the walk back to King’s Cross, and passed out in my bunk. 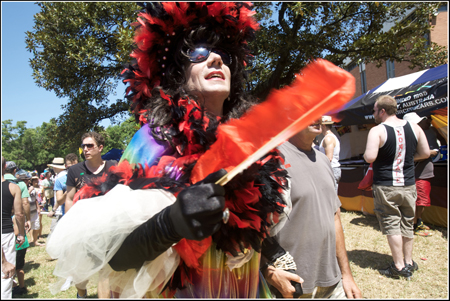 Well here I am in Sydney.

Yeah, so I had the times a bit confused in Darwin, and here I am in Sydney.  The King’s Cross area is a lot like other backpacker havens, so getting settled in hasn’t been that much of an adjustment.  Sydney is of course a huge city and the idea that I am showing up to try to photograph so many events is a little overwhelming at times.  Tomorrow is Fair Day, which is one of the main events of Mardi Gras.  Tens of thousands are going to be showing up in Victoria Park, and I am hoping for some good photographs, but for now I have to fight the urge to sleep.  I look forward to meeting a lot of the community here, which has been so good in helping me try to get a grasp of what is to come.   Don’t sleep Chad, don’t sleep.

Where Women Glow and Men Thunder

Where am I again?

It’s 5am in Darwin, Australia, and I’m sitting in the airport having an average cup of coffee and an over-priced sandwich that looks nothing like the picture, as my bloodshot eyes stare out into space.  I’ve spent the last 2 days almost entirely in airports, and I have another 5 hours on this lay-over before my flight takes off for Sydney.  For the next 8 days I will be photographing the huge Mardi Gras event…..oh I think they are boarding….I’ll write more when I get there.

First off, we’d like to say thank you to Jason Dixon and Jeff McBride, members of the Sydney Gay and Lesbian Mardi Gras team. They have both helped us in getting the permits and passes needed to photograph the events in Sydney.  We greatly appreciate their help, since Mardi Gras 2010 is just around the corner.

Unfortunately, while I won’t be able to go with Chad to Sydney, he will be arriving on Feb. 20 and staying for eight days.  The first main Mardi Gras event Chad will be photographing is Fair day on Feb. 21, held at Victoria Park, so keep an eye out for him if you plan to be there.

Also, thanks to everyone who has shown support for the *New* 2010 Pride Parade Calendar.  If you haven’t had the chance to take a look, it’s pretty fascinating as it includes video clips of pride parades from all over the world.

To help promote the site, we also welcome ad banner swaps on the site, so email us if you would like to exchange LGBT/pride-related link banners!