At each pride march, rainbow flags are proudly carried, but what are the origins?

Gilber Baker was the creator of the original pride flag.  Living in San Francisco, he was skilled at sewing, and friends with Harvey Milk and others in the Gay Rights activists, who often called on him to create banners for the movement.

Baker designed, and hand-dyed with the help of 30 or so others, the first rainbow flags which appeared at the San Francisco pride parade on June 25, 1978.  This first flags had eight stripes, hot pink for sexuality, red for life, orange for healing, yellow for sunlight, green for nature, turquoise for magic/art, indigo for serenity/harmony, and violet for spirit. 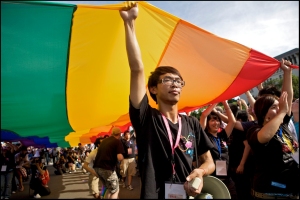 During 1978 as the pride flag became increasingly popular, hot pink was dropped due to the lack of availability of the color.  In 1979 the flag was again modified by dropping the turquoise stripe, so that it would have an even number of stripes.  The rainbow flag is now a proud symbol of the gay rights movement, and is not only found on flags, but t-shirt, bags, and even bottles of Absolute.

Below is an interview with Gilbert Baker where he talks more about the flag’s creation.