We wait patiently in the Moscow courtroom.  The judge is in his chambers deciding the legality of the 5th Moscow Pride march.  Everyone stands as the judge returns.  His announcement – the ban is upheld.

The “Walk with Pride” project is currently in Moscow to document the latest attempt to hold Moscow Pride.  Each year the group Gay Russia, led by LGBT rights activist Nikolai Alekseev, has conflicts with the courts, Moscow’s homophobic Mayor Yury Luzhkov, the police, religious groups, and even neo-Nazis while attempting to demonstrate for equal rights.

While in Minsk, Chad had made contact with Nikolai and approached him about photographing the preparations for this year’s Moscow pride.  Nothing was guaranteed, so we were more than a little relieved to get our first call from Nikolai on Wednesday morning asking if we’d like to accompany him to a preliminary hearing concerning the Mayor’s ban on Moscow Pride. 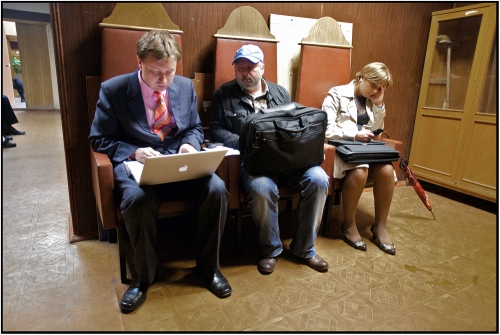 Nikolai (left), Alexey, and a lawyer for the Prefecture await another hearing concerning the Mayor's ban on Moscow Pride

Over the next couple of days we are witness to many court hearings, but each failed to provide the group with the basic right of assembly. 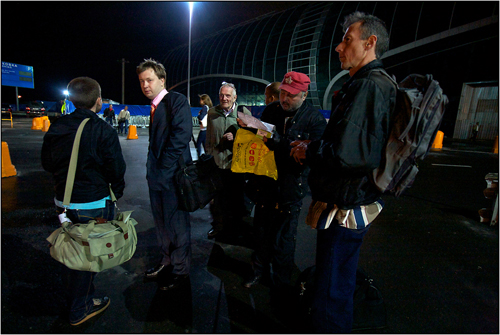 Arrival of Human Rights supporters in Moscow, including Peter Tatchell, from Outrage!, Louice-Georges Tin of IDAHO, and Andy Harley, from UKGayNews.

On Thursday afternoon, following the most recent court decision to uphold the ban, a press conference is held.  During this conference activist Peter Tatchell and other key members of Human Rights organizations, spoke out condemning the ban. 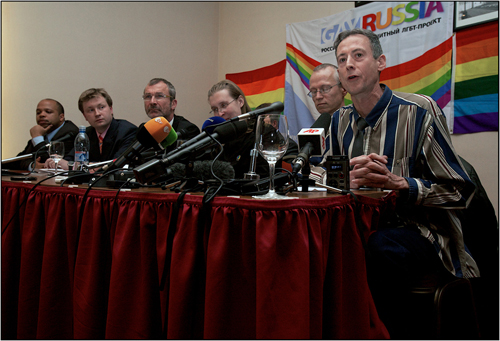 Peter Tatchell (right) and others speak out against the ban on Moscow Pride.

“He should be put on trial for violating the Russian constitution – the real criminals are not the organizers of Moscow Pride, but the Mayor of Moscow and the judges who uphold this illegal ban.” – Peter Tatchell, coordinator for the British HR group Outrage!

For a full report on the press conference, check out the UK Gay News report.

Like
Be the first to like this.
This entry was posted in Journal Entry, Russia and tagged gay, gay activist, human rights, LGBT, LGBT rights, Moscow, Moscow pride, press conference, russia. Bookmark the permalink.