An evening with the editors of StiriGay.ro

We sat down last night with Daniel and his partner Michael at a little bar near Piata Universitatii (University Square) in downtown Bucharest.  These guys operate a local Romanian gay news website called StiriGay.ro.

Over a few beers they shared with us some insights to better understand the situation in Romania.  While the annual Gay-Fest march has been running since 2005, they explained how it is still not yet a “pride parade”, but instead very much a march with an activist message.

Many eyes will be watching Buracherst during Gay-Fest, they told us, so the pride will likely be safe.  It will also be a major media event, however, they divulge that the media always focuses on the drag queens, and try to dramatize it by showing protests, sometimes violent, against it from past years.

When we asked about if they’d experienced active hostility and discrimination in everyday life, Daniel and Michael explained that it wasn’t really like that in Bucharest.  Homophobia is not that rampant on an everyday level, instead people might be curious, not really knowing what to expect when meeting someone who is gay.  However, they are still frustrated concerning the lack of some basic rights, such as the inability to have a civil union and same-sex couple’s right to adoption.

More drinks arrive at the table.  Taking a look around, I have to appreciate the progressiveness of being able to talk like this so openly, a luxury friends in Belarus still can not experience.

While the Romanian acceptance for sexual minorities has come along way since 40 years ago, they admit the older generation is still very set in their ways, though the younger generation is often more open.  It is also very difficult in smaller towns and villages, even just for education and awareness about sexual diversity.

As we talk, Daniel says that he is sometimes frustrated concerning advocacy to those outside the LGBT community. 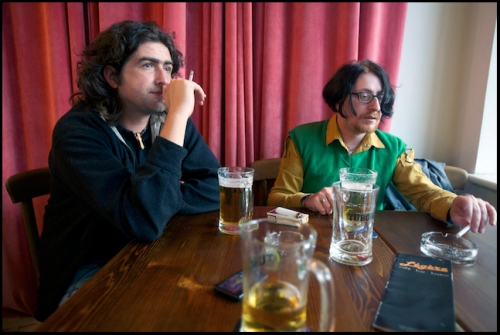 They both wish for more LGBT sponsored activities that would include those outside the community.

“We must convince everybody we are normal … if you are not doing it by involving them, it is in vain.  It is like we are doing it for ourselves and for the media, and for our founders.”

Like
Be the first to like this.
This entry was posted in Romania and tagged Bucharest, civil unions, gay, gay rights, Gay-Fest, human rights, LGBT, LGBT rights, Romania, Stirigay. Bookmark the permalink.