The Metropolitan Community Church (MCC) is an international Christian denomination that reaches out to the LGBT community.  There are MCC churches around the world, including four churches in the Philippines.  Rev. Ceejay Agbayani is a clergy member of the MCC church in Quezon City, and led this year’s candle light vigil at the 2009 Manila Pride March.

Rev. Ceejay was kind enough to answer some questions concerning MCC and the recent pride parade. 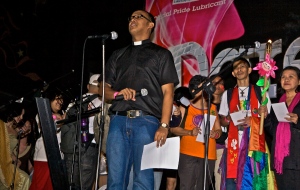 1.  Can you tell us about the history of the Metropolitan Community Church (MCC) in the Philippines.  What do you believe makes the ministry different from others?

The history of MCC in the Philippines is a painstaking effort by the leaders and organizers.  We started from scratch, we organized, and we shared our own talents and treasures to make the Church alive and moving. There have been both ups and downs in the history of MCC Philippines during the 18 years since its establishment.

MCC or Metropolitan Community Church was brought to the Philippines by Fr. Richard Mickley in 1991. With the help of a closeted Filipino Methodist clergy, he was able to establish the MCC by his own, making his “place’” as the “church home” for MCC.

In 1996, the first Filipino clergy was ordained, making Rev.Edgar Mendoza as the first “indegenous” clergy of MCC in the Philippines. Fr. Richard retired from MCC and established the Order of St.Aeldred in Quezon City.

In September 13, 2006, I and my partner Marlon organized the first Bible Study in Quezon City.

The uniqueness of MCC is the fusion on everything, like Spirituality and Sexuality. We firmly believe, based on the Bible, that homosexuality is not a sin, nor it is a sickness. We have a systematic study and theology on this matter. We argue and corrected the six anti-gay verses and presented the pro-gay verses in the Bible.  We also believe in the liberating theology of inclusion and of love.

One characteristic of MCC is that we do not argue on the Table of the Lord. We have the dynamic fusion of the worship tradition according to culture by incorporating Praise and Worship and highly liturgical form of worship.

Once you come to visit our Sunday Worship Services, you will feel that God really is within us. We can not express the feelings. We can also share our experiences.

2.  How many pride parades have you participated in?  And, what was your role in this year’s parade?

Since 1994 MCC has always participated in the annual Pride Marches in the Philippines.

3. What were your thoughts on this year’s Manila Pride Parade?  How did it compare to past marches?

The theme WE DARE WE CARE encompasses all issues of the LGBT, from discrimination, homophobia and stereotyping. We Dare to different because We Care for the future of the LGBT.

I can not compare this year’s Pride march to other Pride Marches because it has a distinct uniqueness and experiences every year.

But what I am proud of this year is that, we can unite the LGBT in prayer.

4. As an ordained reverend, what were your feelings at seeing protesters using religion to put down the marchers?

This was not a surprise for me, this year.  Last year was the first time the parade had protesters. I was shocked and angry last year. I even shouted at them “Would Jesus Discriminate?!!”

But this year, I am more diplomatic and relaxed.  I even talked to them and requested that they not shout at us.  But, they still did.

Actually, I pity them. They promote hate rather than love. Jesus Christ loved the oppressed, marginalized and the outcasts. These protesters are driven by their churches to hate homosexuals at all cost, rather than focusing on love and acceptance. These people use their time and effort to hate us.

5. Do you think in the future mainstream churches will become more inclusive towards the gay community?

I hope and pray that eventually the mainstream churches will become inclusive, accepting and affirming, rather than therapeutic and converting.

Actually, there are good men and women in the mainstream churches who are sympathetic and supportive to the lgbt community. I know a lot of them in the seminary.

I dream someday that all LGBT member of the society will go out every Sunday and go to churches without fear of his or her sexual orientation and gender identity, and freely worship God in Spirit and in Truth.

This will take some time – but I know it will happen!

For more, you can check out these links:

Like
Be the first to like this post.
This entry was posted in Interviews, Philippines and tagged Ceejay, gay, gay clergy, Manila, MCC, MCCQC, Philippines, pride. Bookmark the permalink.

One Response to Interview with Rev. Ceejay Agbayani, MCCQC Clergy