Deciding to develop a project that highlights the vibrancy of gay culture, while advancing a positive message concerning rights for homosexuals has prompted many family and friends to raise a few eyebrows. This is especially so as Chad and I acknowledge being a heterosexual couple. However, I don’t think it should.

Initially, for doing this project we were attracted to the colorfulness of many personalities in the gay community, and the festivity of the marches.  Pride parades are some of the most visible representation of gay pride and the beauty of diversity.  We also saw that underneath the pageantry lie some serious issues concerning equality.  As we both firmly believe that the subject concerning rights is not only a gay issue, but a human issue, it makes perfect sense to do this project.

We would like people, no matter their orientation, to similarly see the issues in this light.  In this way, our hope is to encourage even those who may feel at first removed from the topic of gay rights to become more aware, and distressed at the current state of inequality.

“Should we go?  Shouldn’t we go??”  These questions were floating in the air as we carefully considered whether or not to attend the 2009 Manila Pride march.

We’ve just begun the mammoth task of trying to organize, find funding, and setup the “Walk with Pride” project, not an easy task.  While Chad has taken part in lengthy photography assignments before, they’ve usually involved staying in one place, so the logistics of planning for 14 months of travel is … hm, what’s the right word, “interesting”.

The number of pride parades held each year is sizeable, with well over 400 large marches held, and parades ranging in size from less than 60 marchers, to the largest in São Paulo, Brazil, with over 3 million people attending the 2009 parade.  Many of the biggest pride celebrations are held in June, as it is principally recognized as Gay Pride month.  Additionally, a lot of the top parades are run during the same weekend, the last in June (June 26-27), which commemorates the Stonewall Riots of 1969.  However, with so many dates a rough itinerary is just beginning to fall in to place.  We’ve decided to officially start the project in May 2010, traveling to Minsk for the second annual Slavic gay pride parade, then moving into Europe during June, with a quick trip to the states for the San Francisco LGBT Pride on the weekend of June 26-27, followed by July and August back in Europe, September still unclear, but October has both the Hong Kong and Osaka parades.  Our rough plan goes on like this until June 2011, until we finally end the project at either the NYC or Washington D.C. pride gatherings.

But, what about this year’s Dec. 5, 2009 Manila Pride march?  Why not unofficially start now, visiting some of the parades that are closest to our base of Taiwan?  The Philippines gay community is supposed to be particularly vibrant, and despite being a predominantly Catholic country, it was Manila where the first ever gay rights parade in Asia was held in 1994.  Similar to others, the original parade date honored the Stonewall Riots, but in 2003 the march was moved from June to December in support of Human Rights month.  Since 1999 the parade has been organized by Task Force Pride a loose network of groups working to promote positive visibility for the gay community.

The decision: We should go

… at least that was our decision.  My work superior felt differently on the matter, so I will most likely be unable to leave the country until May when we officially start.  However, expect to see Chad (the red head with the camera) around Manila as of the 3rd.  The march’s theme is “We Dare, We Care,” and will commence at 5pm in the lively Malate district.  Chad’s pictures of the march will be posted in the week following the parade, so check them out on the project’s main pride website: walkwithpridenow.com , and on our Flickr account.

Country Details: Gay Rights and Culture in the Philippines

Same-sex Marriages Allowed? No
◊ The Metropolitan Community Church Philippines has been conducting same-sex holy unions since 1991, and the communist New People’s Army of the Philippines has been conducting same-sex marriages since 1998.  However, the Philippine Constitution does not recognize same-sex marriages.
◊ UPDATE: As of Dec, 2009 a Manila lawmaker is seeking to criminalize same-sex unions.  House Rep. Bienvenido Abante, Jr. said such marriage should be discouraged by a criminalizing measure because it is “highly immoral, scandalous and detestable act.”  Under the bill, violators faces 15 years of imprisonment and a fine of not more than P150,000. (link)

Can Gays Serve Openly in the Military? Yes
◊ Beginning in 2009, openly gay and bisexual persons are now allowed to serve in the military.

Anti-discrimination Laws?  No
◊  Proposed in 1998, but still not passed, the Anti-Discrimination Bill would criminalize practices and policies that discriminate on the basis of sexual orientation and gender identity.  It would cover discrimination in the workplace, educational institutions, health centers, commercial establishment, police force, the military, and others.

Legislature Concerning Gender Identity? Some
◊  The Philippines Court of Appeals ruled in 2008 that sex reassignment is not a valid reason to allow for the official change of someone’s “name” or “gender”.

Rainbow Bloggers is a website that posts articles created by LGBT Filipino bloggers, in hopes of encouraging aspiring writers.  The site also highlights a ‘Rainbow Blog of the Week.’ http://www.rainbowbloggers.com/

Task Force Pride is the organizing network of the 2009 Manila Pride March. http://taskforcepride.blogspot.com/

Same-sex Marriages Allowed? No
◊ In 2003 legislation was proposed by the government to grant civil unions or same-sex marriage under the Human Rights Basic law, however it was  opposed by cabinet members and did not succeed – yet, Taiwan did become the first country in Asia to suggest such a law.

Can Gays Serve Openly in the Military? Yes
◊   There is no policy screening out homosexuals.

Laws Concerning Gender Identity? Some
◊  As of 2007, female-to-male transgenders cannot get an ID card that identifies them as male unless they have undergone all three parts of gender reassignment surgery.  This law was protested against by the transgender group Taiwan TG Butterfly Garden (chinese only site)

GlobalGayz is a gay-owned travel, news and culture website focused on les-bi-gay-trans life in countries around the world.  It provides gay travel, life, cultural information, and news, on various countries, including Taiwan. http://www.globalgayz.com/country/Taiwan/TWN

Out in Taiwan = This is a comprehensive and uncensored gay resource for English speakers in Taiwan. http://www.outintaiwan.com/

It all started simply enough, Sunday breakfast and newspapers. Chad (Charles) and I were having breakfast at a local outdoor diner near the apartment we share in Taipei, Taiwan. I was engrossed in the China Post, one of Taipei’s English language newspapers, when I came across a picture of some very displeased Taiwanese, some carrying giant wooden crosses while others held up signs. The article was about an anti-gay march, a preemptive strike held a week before the annual Taipei gay pride march. 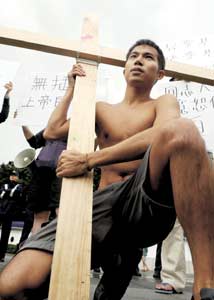 A shirtless gay rights supporter carries a cross during a counter-protest against marching anti-gay Christian groups in Taipei. (CNA)

It just seemed so odd, while I’d been use to seeing bible-bashers in my native US seeing pictures of the 2,000 or so Christian protestors with their message of “purifying the skies of Taiwan” seemed a little out of place in a country where Buddhism, Confucianism, and Taoism dominate. I showed the article to Chad, and he decided to photograph the 2009 Taipei March.

The images from the parade were strong, showing the energy and pride of the 20,000 plus that attended the march, one of the largest in Asia.  The theme was “Love Out Loud,” with the parade marching past government offices, sites linked to the Taipei LGBT community, and beginning and ending in front of the Presidential Office.

As a photographer, Chad has a good eye for compelling stories, especially those that resonate with his personal beliefs concerning equality.  It was less than a week later that Chad came up with the idea for the “Walk with Pride” project, 14 months of photographing and documenting gay pride parades around the globe. Gay rights, like all human rights, is a topic that we can both sincerely and enthusiastically support, and after witnessing the colorful celebration in Taipei we both realized we wanted to do something to support this movement. Some key stops on our international journey will be the pride parades held in Sydney, Tokyo, Moscow, Tel Aviv, New York, Toronto, San Francisco, Mumbai, and São Paulo, but also grass-roots festivals of pride. While imagery will often celebrate the colorful atmosphere of parades, the online documentation intends to center on the main issues and stories behind the marches. As the blogger, I (Sarah) will be working to provide information on the history of the gay movement in each country, stances on gay rights and laws, interviews with leaders and organizers, individual stories, and even comparing some of the anti-gay rights arguments.

Our aim with this project is to promote lesbian, gay, bisexual, transgender, and all sorts of pride on an international level.  While many people may be aware of regional attitudes toward homosexuality, through high-resolution photos and the joys of social media we hope to share some of the similarities and differences in gay rights and gay culture around the world. We hope you enjoy our humble efforts to take on the documentation of this complex, but very worthwhile topic in “Walk with Pride: A Year in Step with the Global Gay Community.”